My current research is entitled, "Coupled Climate Model Biases in the meridional freshwater transport and its implication to the AMOC stability." It is focused on the GFDL-CM3 model and its biases on the meridional freshwater transport, and how they are influencing on the modelling of the AMOC stability. My work involves calculating the AMOC streamfunction in the coupled climate model for two different periods: (1) 1860-2300 and; (2) 2006-2016. The first period will be used to assess the modelled AMOC stability, which is believed to be in a stable OFF state. The second period will be used to assess the accordance of the meridional freshwater transport modelled by the GFDL-CM3 model using the RCP4.5 scenario and observations, using in situ measurements and the model HYCOM-NCODA, which comprises data assimilation. We believe that by combining these results we will be able to evaluate the distribution and magnitude of biases in the coupled model in order to improve the quality of the results presented by it. To further increase the credibility of the research, satellite data will be used to validate the assimilation model.

As a member of this particular cruise, I would like to enhance my programming skills and to acquire more knowledge on the AMOC itself, on how it is calculated in situ, the equipment used, the structure of the water column and its physical and biogeochemical parameters. 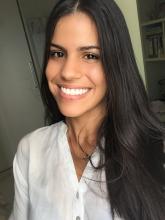