The cruise is due to depart from Southampton, UK on 14 April 2017 and return to Southampton, UK on 1 May 2017. It is part of a long-term monitoring programme that conducts time-series measurements at the Porcupine Abyssal Plain (PAP) Site and involves an annual cruise to the Site to turn around the moorings and conduct water-column and benthic sampling. The PAP sustained observatory has been the focus of repeated study of the entire water column and seabed since 1989. It is at an open ocean location with water depth of 4800m and is thought to be influenced little by the adjacent continental shelves and the mid Atlantic ridge. It is subject to less vigorous hydrographic influence than many open ocean sites and as such processes occurring in the euphotic zone exert a direct influence on the underlying water and seabed. The observatory comprises a variety of sensors which make meteorological, biogeochemical and physical measurements on the properties of the lower atmosphere, the water column and the seabed, some of the data being transmitted every few hours to shore via satellite. This provides data on the time varying properties of the location but in addition to this they provide the temporal context for ship based research cruises. Find out more about the PAP Site programme here: http://projects.noc.ac.uk/pap/.

The fellow will participate in the ship’s mobilisation for a few days prior to the cruise, join the ship in Southampton and participate in the cruise, receiving one-to-one training.  The student will be expected to contribute fully to the formal reporting of the team’s operations during the cruise, as will be published as an NOC Cruise Report (see e.g. http://projects.noc.ac.uk/pap/cruise-reports). 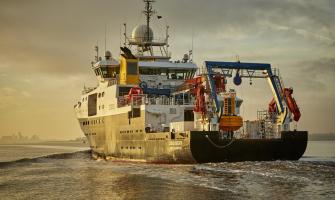