The main objectives of the cruise are: a) The study of oceanographic processes in the waters of the Cape Verde Archipelago and b) The observation of surface circulation in the Atlantic basin, including the mapping of sargasso distribution in the tropical and equatorial East Atlantic basin.
A multidisciplinary observation program in the areas of physical oceanography, marine chemistry and marine biology covering the waters of the Cape Verde Archipelago will be carried out between October 30 and November 15 2021 by a scientific team from IH, ESCM-UTA and GEOMAR.
As outcomes of the cruise, it is intended to show how the biogeochemical processes are related with the complex oceanic dynamics that characterize that area, where the Canary Current, to the north, inflects westward into the Equatorial North Current and, to the south, the Equatorial Countercurrent recirculates originating the current of Mauritania and interacting with the southern region of the Archipelago.

The Open Sea mission covered an extensive area of the Eastern Atlantic and took the opportunity to launch a set of NOAA surface driftfloats in previously defined geographical locations that fall within areas characterized by important circulation structures of the Eastern Atlantic Ocean. The data transmitted by these floats in real time will contribute to NOAA’s Global Drifter Program and will allow to deepen the knowledge of these large circulation systems. The set of floats that was launched near the Cape Verde Archipelago will complement the observations made by NRP D.Carlos I. This same set of observations – that includes sample collection at selected locations and depths – will also allow the biogeochemical characterization of the water masses.

Oceanographic processes in the waters of the Cape Verde Archipelago

The trainee will collaborate with the scientific crew in all sampling activities during the cruise (30 October - 15 November 2021) and sample processing and analysis at the Instituto Hidrográfico (host institute), Portugal, for a period of 2 months after the cruise.

The specific objectives of the training work are:
1 - Participation in the oceanographic campaign carried out from 30 October to 15 November 2021, with practical introduction to sampling techniques, treatment and analysis of samples and acquisition of in-situ data;
2 – Integration in the laboratories of the Hydrographic Institute and in the current methodologies of the laboratory, with introduction to the validation and quality control of analytical methods, taking into account the competency requirements required to a testing laboratory by the international standard ISO/IEC 17025:2017.
3 - Analysis of in-situ data obtained: temperature, pH, salinity and dissolved oxygen;
4 - Application of laboratory techniques to confirm the quality of the data obtained in situ;
5 – Determination of physical and chemical parameters using preferably the technique of molecular absorption spectrometry by segmented flow (for the determination of nutrients) and atomic absorption spectrometry (for the determination of metals;
6 – Determination of chlorophyll concentration as a proxy of phytoplankton biomass using spectrometric methods as analytical technique;
7 - Study of phytoplankton groups;
8- Treatment and correlation analysis of the data obtained. 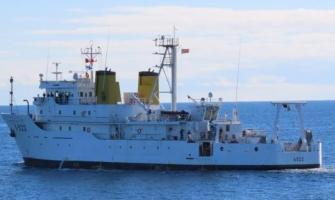