Within the framework of BMBF RACE – Nordatlantik Synthesis as well as the aims of POF GEOMAR, the aim of this cruise is to investigate the variability of the western boundary current system off South America as well as to estimate the variability of the Atlantic meridional overturning circulation (AMOC) at 11°S. A particular focus at the western boundary off Brazil will be on the transport variability of the North Brazil Undercurrent (NBUC) – as part of the AMOC and the subtropical cells (STCs) – on timescales from intraseasonal to decadal. These observations will be complemented with the observations obtained on the meridional section across the equator at 35°W especially with respect to the signal propagation and changes of water masses.

The main operations during M159 will be the recovery and redeployment of several deep sea moorings, station work and the data recovery of two moored pressure inverted echo sounders (PIES). For the station work mainly the combination of CTD and Lowered ADCP will be used. In addition, underway measurements of upper ocean currents with the two shipboard ADCPs, hydrographic measurements and with the thermosalino-graph probe will be performed.

The BMBF collaborative research project REEBUS aims at investigating the role of eddies in the carbon pump of eastern boundary upwelling systems. During M159, the main operations related to REEBUS will be the recovery and the deployment of the Cape Verde Ocean Observatory (CVOO), a deep-sea mooring located to the north of the Cape Verde islands.

The observational programme consists of long-term velocity, temperature and salinity time series from a mooring array off the Brazilian coast at 11°S and high spatial resolution velocity and hydrographic measurements along two hydrographic sections at 5°S and 11°S. In addition, two pressure inverted echo sounders (PIES) are moored at the western boundary at 11°S. Together with data of two other moored PIES at 11°S on the eastern side ofthe Atlantic and in combination with data of the eastern and western boundary  current transports and the basin-wide Ekman transport, the strength and variability of the AMOC at this latitude can be estimated. 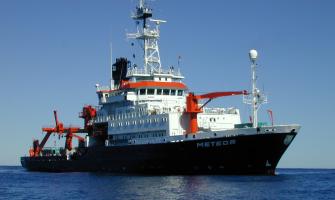