The Blue EArth GLobal Expedition (BEAGLE), an international circumpolar cruise in the Southern Hemisphere, was organized by JAMSTEC (Japan Agency for Marine-Earth Science and Technology) to commemorate the 30th anniversary of its establishment. The expedition took place on board the RV Mirai, one of the largest research vessels in the world. The project was comprised of six legs, each approximately four weeks long, commencing in Brisbane, Australia on 3 August 2003, and ending in Fremantle Australia on 19 February 2004. The cruise was designed to enhance research activities in the Southern Hemisphere, in accordance with the São Paulo Declaration, drawn up at the 2nd meeting of the Partnership for the Observation of the Global Oceans (POGO) held in Brazil in 2000.

The main objectives of the cruise were to detect and quantify temporal changes in the Antarctic Overturn System corresponding to global warming, through high-quality observations along the WHP lines (WOCE Hydrographic Program), and secondly to estimate the amount of anthropogenic carbon taken up by the Antarctic Ocean. In addition, a comprehensive suite of bio-optical measurements was performed throughout the cruise. These measurements were used to validate of satellite ocean-colour data, as well as to improve satellite-derived estimates of phytoplankton standing stocks and primary production.

In addition, JAMSTEC offered to accommodate up to three trainees, as well as one bio-optical specialist on each leg of the cruise. Accordingly, IOCCG, POGO and IOC awarded a limited number of scholarships for young scientists to participate in any one leg of the cruise, and to receive hands-on training on bio-optical and other oceanographic measurements on board a research vessel. On-board expenses and berth fees for all trainees and bio-optical specialists were covered by JAMSTEC.

A unique dataset over a large ocean area was collected during the BEAGLE cruise with standardized methods for the calibration of satellite data on ocean colour (i.e. the plant pigment chlorophyll a), using a suite of shipboard measurements on phytoplankton. A major insight was that the same processes that determine the concentrations and distribution of phytoplankton species over the vertical water column at a single geographical location are also responsible for differences in plankton physiology, ecology and genetics between entire ocean basins (see Bouman, H.A. et al., Science 312, pp. 918-921 (2006) 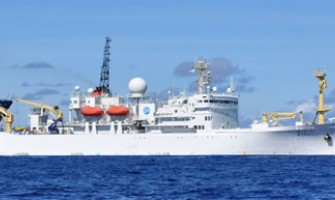