This was the eighteenth in the series of Atlantic Meridional Transect cruises and was carried out on board the British Antarctic Survey research vessel, the RRS James Clark Ross.

The cruise sailed from Immingham in the UK on 4 October 2008 and ended in Port Stanley, Falkland Islands, on 10 November 2008.

This was the first of the series of AMT cruises funded through Theme 10b of the NERC Oceans 2025 science programme, which is a scientific collaboration between the Plymouth Marine Laboratory and the National Oceanography Centre, Southampton.

Measurements taken on the cruise included hydrographic, chemical, ecological and optical data. Many of these measurements were made in underway mode (either via towed instruments or those connected to a sea water supply on board) with minimum personnel intervention. Depth profiles of temperature and salinity were taken daily, both pre-dawn and mid-morning usually to a maximum depth of 300m.  Boundaries between upper ocean water masses were determined by the position of current jets and compared with near real-time satellite images and upper ocean density measurements.

The selected candidate had the opportunity to:

- Visit Plymouth Marine Laboratory (PML) in the UK, for one month prior to the start of the cruise to participate in cruise preparation and planning;

- Go on the cruise and help make hydrological, bio-optical and/or ecological observations; and

- After the cruise, spend approximately one additional month at PML, learning to analyse the results statistically and interpret them.

This fellowship program was open to early scientists, technicians, postgraduate students (PhD or MSc) and Post-doctoral Fellows involved in oceanographic work at centres in developing countries and countries with economies in transition. 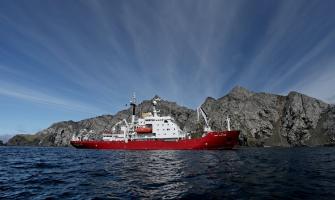